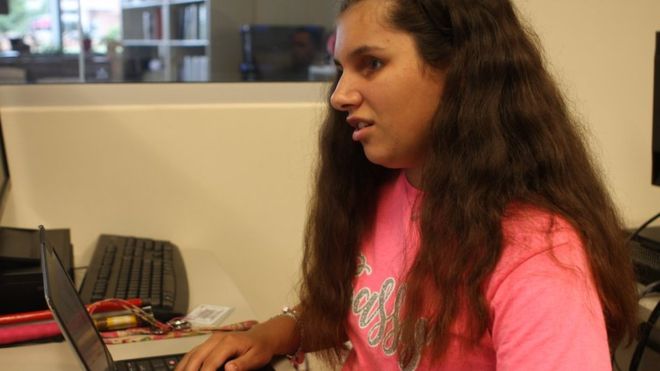 As our everyday world moves increasingly online, the digital landscape presents new challenges for ensuring accessibility for the blind. A recent court challenge against Domino’s pizza may be a watershed case guiding the rights of disabled people on the internet, writes James Jeffrey.

Each swipe 17-year-old Maysie Gonzales makes on her smart phone is accompanied by what sounds like the famous Stephen Hawking voice barking out orders at a relentless pace.

“Sometimes I speed it up to 350 words a minute, it depends what mood I am in,” says Ms Gonzales, who lost her sight when she was two years old through retinal cancer.

Screen readers translate on-screen information into speech or Braille. They have broken open the internet for people who are blind or visually impaired, and for those with other disabilities.

But the device only works effectively on websites that are compatible.

“Sometimes it can be horrible, it depends on how the website has been set up,” says Ms Gonzales.

Hence the case Guillermo Robles, who is blind, brought against Domino’s Pizza after he was unable to use his screen reader to use the company’s website and mobile app.

A federal court agreed with him, and now Domino’s has petitioned the Supreme Court to hear Robles’ case, in what could prove a landmark battle over the rights of disabled people on the internet.

“This isn’t just about ordering the likes of pizza or surfing Amazon,” says Chris Danielson, a representative with the National Federation of the Blind (NFB). “People are doing everything online nowadays, so it’s about blind people being able to access the likes of online banking, applying for employment and doing the necessary online tests, accessing cloud-based tools in the workplace, and all the rest.”

“We’ve even been told by businesses before that they understand, but the fact is blind people are not a very big market,” Mr Danielson says. “That’s what we are dealing with.”

Nowadays signs designating access for shoppers with disabilities – from parking spaces to restrooms to dressing rooms – are a ubiquitous part of the retail landscape.

This is thanks to the Americans with Disabilities Act (ADA), the 29-year-old federal law that prohibits discrimination based on disability.

But ADA requirements that are relatively clear when applied to physical stores – such as determining where ramps should go and what height grab bars should be – become much more difficult to discern with a website.

“The online environment was never intended to be covered by the ADA,” says Stephanie Martz, senior vice-president and general counsel for the National Retail Federation (NRF), which along with other business groups like the Chamber of Commerce and the Restaurant Law Center has come out supporting Domino’s. 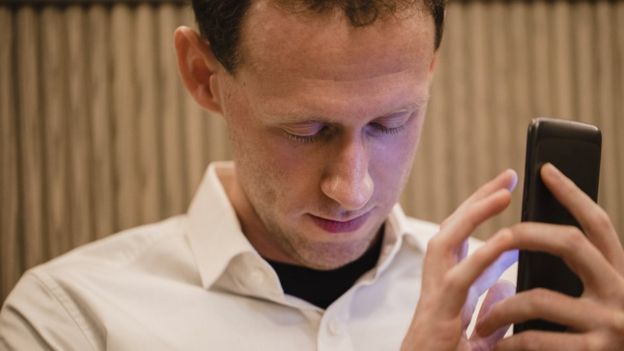 “The ADA took effect before the internet as we know it today existed, and more than 25 years later there is no clear objective guidance on what constitutes an ‘accessible’ website. There’s not enough clarity in the law to know what is accountable.”

But advocates like Mr Danielson counter that if one follows that logic then the whole US Constitution could be undermined. “If a 30-year-old law is deemed out of date and not applicable then that applies to a whole lot of laws.”

As e-commerce has grown, retailers are increasingly faced with ADA lawsuits over lack of accessibility, particularly for the blind or visually impaired.

Website accessibility lawsuits hit a record high in 2018, with retail being the most frequently targeted industry. More lawsuits were filed in court in the first six months of 2018 (1,053) than in all of 2017 (814), according to the NRF.

The likes of Visa and Target have lost such lawsuits, and earlier this year a class-action was filed against Beyoncé’s official website, alleging that Beyonce.com violates the ADA by denying visually impaired users equal access to its products and services.

“To be fair to businesses,” Mr Danielson says, “there are lawyers taking advantage of the situation, but cutting the legs from under the ADA is an overcorrection… and stops the flow of legitimate plaintiffs.”

Ultimately, those pushing for digital accessibility argue that businesses have no excuse for dragging their feet over it.

“It’s not hard to do, it should just be part of best practice, not an additional line item, just like making sure a website loads quickly is,” says Laura Kalbag, a website designer and author of Accessibility for Everyone.

“It basically just involves HTML coding, which even a blogger can do. If it is a huge website, it might take some time, but the work itself is not complicated.”

She adds it is a myth that making a website accessible makes it ugly, there is no correlation – you can still have snazzy images and graphics.

Ms Gonzales says that because she is also gluten intolerant, she likes to use Domino’s as it offers gluten-free pizzas, and she has managed to use its online site. But selecting toppings is tricky – and sometimes she has had to get her mother to step in.

That the courts are also stepping in is part of the problem, Ms Martz explains. “This should be dealt with by government and Congress amending the ADA.”

Any discussion of accessibility should look at the whole picture – a blind person can always ring Domino’s toll-free number and order that way, she adds.

“As a teacher who has to speak all day, sometimes, like everyone else, I don’t want to get into another conversation and just want to do it online,” Jeff Molzow, a blind instructor at the Criss Cole Rehabilitation Center which trains blind people to compete in the work force, says about why that toll-free number doesn’t always appeal.

“Also, I want time to peruse the menu and make up my mind – you can’t do that if you are speaking to someone on the phone.”

The Domino’s case is symptomatic, say many working with the blind, of the wider problem of how blind people, or anyone with a disability, are still not fully on society’s radar.

“All the info is out there about digital accessibility. Tim Berners-Lee, the inventor of the internet, was discussing it in the mid-90s, and we have pushed it for years,” says Jim Allan, an accessibility coordinator at the Texas School for the Blind and Visually Impaired.

“But people still have low expectations of what blind people can do and don’t use their imaginations about the possibilities – until they are hit with the fire hose of info from the likes of us, after which they get it.”

The awareness of businesses and companies is improving but still slowly, says Mr Allan, noting that only federal and state websites are mandated to be fully accessible by all users. This despite digital accessibility being required by a much larger segment of society, especially as people age and start to lose sight and hearing.

“We treat disabled people as if they are different but that isn’t the case, as digital accessibility affects all of us,” says Ms Kalbag. “If nothing else, you should see it in a selfish way, as one day you will probably need this type of accessibility.”

It is the same in the physical realm, where the likes of wheelchair access ramps are gladly embraced by mothers with prams and cyclists.

But even when digital accessibility is achieved, challenges remain for blind people that are familiar to all.

“Sometimes I worry about using social media too much, like everyone else,” Ms Gonzalez says.

“But without my phone I would be very lost – I wouldn’t be able to do much and would be very dependent on others, when I prefer to do it on my own.”