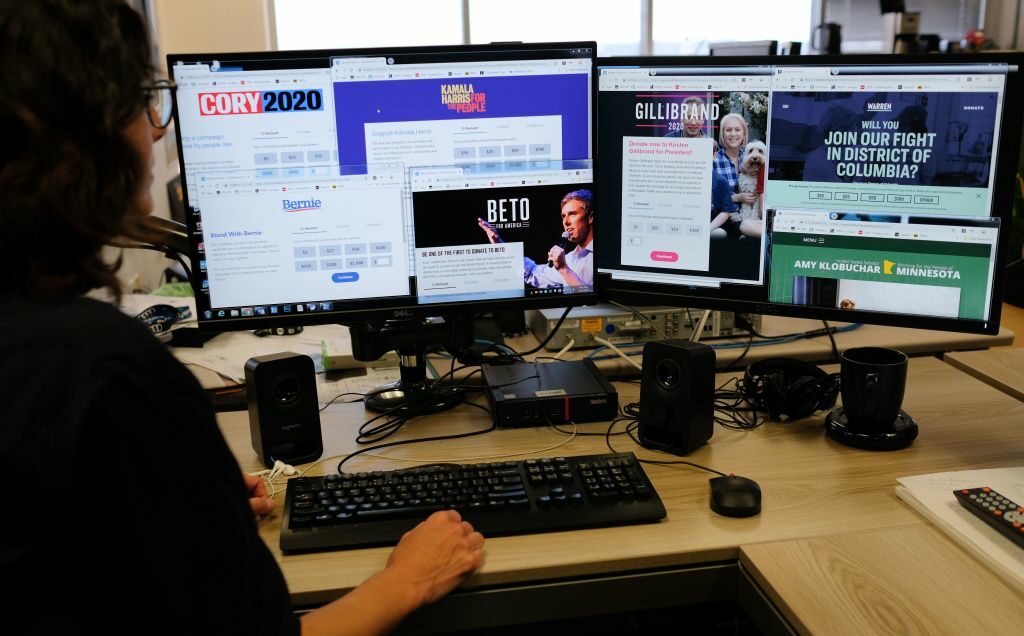 When Virginia Jacko found out the first Democratic presidential debates of the 2020 election cycle were going to be held in Miami, she was excited to learn more about the candidates and their policies before they arrived in her city. But as she clicked on the candidates’ websites, she realized that most were not accessible to blind voters like her.

As the CEO of Miami Lighthouse for the Blind and Visually Impaired, Jacko decided to take action. She and her staff reviewed the websites of all 20 Democratic presidential candidates participating in this week’s debates, as well as those of President Donald Trump and former Massachusetts Gov. Bill Weld, and they concluded that none of these 2020 presidential campaigns have websites that fully comply with the Americans With Disabilities Act.

Even as many of the candidates have said they want to reach out to disabled voters and advocate for disability rights, their campaigns have built websites that could prevent many of those voters from engaging with them, the analysis found.

“It makes a person furious. It makes me wonder why candidates talk about their concern for people with disabilities and yet out of ignorance, they have the sin of omission, of not considering this,” Jacko told TIME.

Roughly one in four American adults has a disability according to the Centers for Disease Control and Prevention, and at least 12 million Americans over age 40 have vision or eye problems. While website accessibility can vary depending on a person’s disability and individual needs, Jacko and her team focused on whether those who are blind or have low vision would be able to navigate and gather information from candidates’ websites.

They assessed the candidates’ pages using 10 different criteria, such as whether logos and links were coded with descriptive text that could be converted by screen-reading software into audio messages and whether a website’s donation form could be operated by keyboard commands for those who cannot use a mouse. Then the team scored each item on a scale of one to four, with one meaning not accessible, two meaning somewhat accessible, three meaning mostly accessible and four representing fully accessible.

None of the candidates scored fours in all categories, but former Vice President Joe Biden, former Rep. John Delaney, Rep. Tulsi Gabbard and Sen. Kirsten Gillibrand performed the best, with an average score of 3.00. Massachusetts Sen. Elizabeth Warren fell at the bottom of the list, with an average score of 2.00, closely followed by a tie of Vermont Sen. Bernie Sanders and South Bend, Indiana, Mayor Pete Buttigieg at 2.11.

Because the Americans With Disabilities Act was passed in 1990 just as the Internet was coming into existence, there are no regulations explicitly describing what private businesses must do to make their websites comply. There are rules for government websites, but it’s not necessarily clear whether presidential campaigns would count as governmental or private entities for this purpose, according to Peter Blanck, an expert on disability law and chairman of the Burton Blatt Institute at Syracuse University.

In the absence of official government rules around internet accessibility, a consortium of web experts created a set of Website Accessibility Content Guidelines that have been widely adopted as the best practices for making websites accessible to people with disabilities. These are what the Miami Lighthouse team relied on to determine the 10 criteria for its review.

In 2010, the Department of Justice said it was drafting rules that would clarify how the ADA applies to websites. But the process was delayed, and in 2017, the Trump Administration announced it was withdrawing the rule-making process amid its effort to cut back on federal regulations. Members of Congress have asked the DOJ to move forward with website accessibility rules, but in the meantime, enforcement has been left up to the courts, and there has been a surge of lawsuits accusing businesses of failing to make their websites accessible.

“It’ll be the 30th anniversary of the [ADA] coming up, so I don’t have too much sympathy for a major bank or a major restaurant chain that could somehow say they were not aware of it,” Blanck says. But he notes that lots of businesses say they want the opportunity to change their websites before being sued in court.

When it comes to the 2020 campaigns, Miami Lighthouse for the Blind and Visually Impaired just wants the candidates to recognize their lack of accessibility and to encourage them to fix their sites. Jacko reached out to all the campaigns included in her study, she says, but had only heard back from Yang’s and Warren’s campaigns by the time her report came out on Wednesday.

Most of the campaigns have taken other steps to be accessible, such as captioning their announcement videos to help deaf voters, answering questions from disability nonprofit RespectAbility or reaching out to activists in the disability community. Sanders even includes a promise to “fight for disability rights” on his list of campaign issues.

But none of the candidates display a website accessibility statement with contact information for voters who have questions about accessibility, and none offer the option for users to change the font size or color contrast on their websites. These kinds of changes would be easy to make, Jacko says, and would help not only disabled people, but also aging voters who are just starting to experience vision loss or other access issues.

“I do not think there was any ill intent,” Jacko says. But she notes that the candidates are potentially missing out on millions of voters — and their donations — if they do not make their websites more accessible. “They want to be change agents regarding their policies,” she says, “and this is an opportunity for all of the candidates to be change agents on website accessibility.”