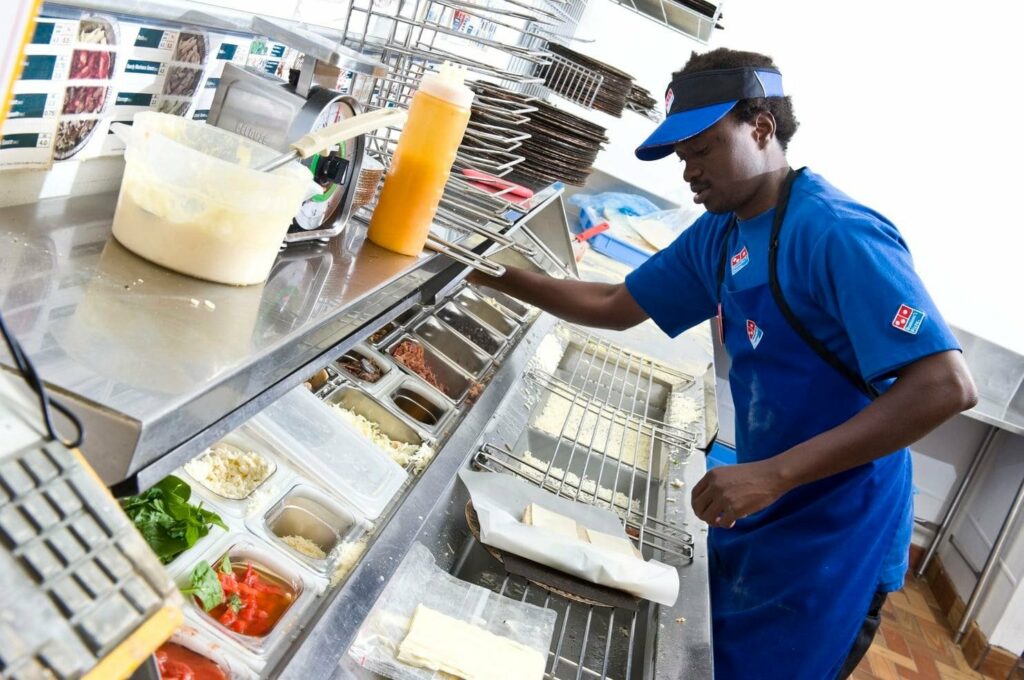 Domino’s sells more than 2.5 million pizzas every day, and the company says it offers at least 15 ways to order one. But Guillermo Robles, who is blind, said neither the company’s website nor its mobile app allowed him to order the pizza he wanted, or receive a discount for ordering online.

Now Domino’s, backed by the U.S. Chamber of Commerce and the nation’s largest retailers, wants the Supreme Court to step in to decide whether the Americans With Disabilities Act, which has transformed America’s physical landscape, applies equally to the Internet.

[Domino’s to start delivering pizza via robot this fall]

The ADA “says nothing about the accessibility of websites or applications on smartphones, whether standing alone or in connection with restaurants, stores, or any other brick-and-mortar establishments that qualify as public accommodations,” wrote Washington lawyer Lisa S. Blatt, who represents Domino’s.

“When Congress passed the ADA in 1990, websites were in their infancy, and apps did not yet exist.”

Lower courts have said the statute does apply, although they have disagreed about exactly when and to whom. As a result, the number of lawsuits has exploded: 2,250 federal suits asserting ADA violations based on website inaccessibility were filed in 2018, nearly triple the number from the year before, according to the Domino’s brief.

Beyoncé’s website has been targeted. So have art galleries in New York.

And the National Retail Federation tells the Supreme Court in a friend-of-the-court brief that its website doesn’t comply with industry standards, either.

“Only this court’s intervention can establish a true nationwide standard establishing the proper scope” of website accessibility, writes Washington lawyer Pratik A. Shah, representing the retailers. “It is time for this court to bring order to a chaotic legal landscape marked by unpredictable and unworkable accessibility standards that run counter to the goals of the ADA, consumers, and the retailers who serve them.”

Businesses have rallied around the Robles case in their effort to persuade the Supreme Court to intervene, even as they profess that it would be in their best interests to make their goods as accessible as possible.

Robles sued because he said his attempts in 2016 to use the Domino’s website and mobile app to order a pizza for delivery were unsuccessful.

A federal judge in California agreed with Robles that the ADA covered websites but dismissed the lawsuit. He agreed with Domino’s that its due process rights would be violated because the Department of Justice has never made good on its obligation to issue guidance on exactly how websites and apps should comply with Title III of the act, which concerns public accommodations.

But earlier this year, a unanimous three-judge panel of the U.S. Court of Appeals for the 9th Circuit disagreed.

“At least since 1996, Domino’s has been on notice that its online offerings must effectively communicate with its disabled customers and facilitate ‘full and equal enjoyment’ of Domino’s goods and services,” Circuit Judge John B. Owens wrote.

He added: “While we understand why Domino’s wants DOJ to issue specific guidelines for website and app accessibility, the Constitution only requires that Domino’s receive fair notice of its legal duties, not a blueprint for compliance with its statutory obligations.”

The judges sent the case back for the lower court judge to decide whether Domino’s has complied with its obligations, saying “courts are perfectly capable of interpreting the meaning of ‘equal’ and ‘effective.’ ”

Domino’s and the business interests urging the court’s intervention said the decision in the 9th Circuit — which covers California and most of the western United States — was a game-changer.

“Virtually every national business and non-profit offers its goods and services at physical locations within the Ninth Circuit,” Domino’s tells the court, so its rule “will apply nationwide no matter what. No one can tailor their online presence to fit different rules in different circuits.”

But Eve Hill, a Baltimore attorney who has worked on website accessibility cases for the National Federation of the Blind and at Justice, said the decision “breaks no new ground.”

Courts across the country have found that websites and apps must comply with the ADA, she said. Companies may not like the message, but that doesn’t mean there is a need for the Supreme Court’s attention.

And she said the Justice Department’s inability to issue guidelines for compliance — it announced in 2017 that it was giving up the effort — does not mean companies are helpless. The lack of a national standard could be seen “as a feature, not a bug,” freeing companies to comply in different ways, Hill said.

In the Domino’s petition, and the accompanying amicus briefs, is a familiar battle between companies and lawyers who sue them.

Gregory G. Garre, representing the Chamber of Commerce, told the court that an “opportunistic plaintiff’s bar” has discovered “a lucrative sue-and-settle practice against businesses.”

“Businesses now face a rising sea of litigation that flows from one venue to another as plaintiffs’ lawyers seek out the most favorable local precedent, leaving companies unable to tell what standards they should meet in order to provide access and avoid liability,” he wrote.

Domino’s said the firm representing Robles has filed 14 suits on his behalf, and more than three dozen for a Montana resident. Joseph R. Manning Jr., the Newport Beach, Calif., lawyer who represents Robles, said in an email that he was not discussing the pending case.

He is due to respond to the pizza chain’s petition to the high court next month.

Her client, the National Federation of the Blind, is not interested in “stick-up lawsuits,” she said, but securing companies’ compliance in opening the web to people with disabilities.

The case is Domino’s v. Robles.